Why not try these new LipoContour pants?
Last updated: 5 July 2007 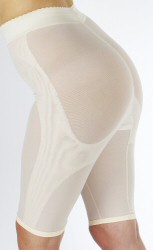 How does it work?

How much does it cost?

We asked one of our viewers to try out them out…

She is a garden designer who suffers from cellulite. She has tried everything under the sun to try to eradicate the dimples, including, electrolysis, wraps, exercising and shower scrubs.

She says that she has had cellulite since she was 16 years old and is very conscious of it. She is only 9.2 stone and is not overweight. Her job as a gardener is very physical and she does an all day work-out.

Gina’s first impression was that they were very weird to wear.

As they have to be worn in the day, she’s not sure how’s she’s going to get on wearing them in the heat, especially as she’s outside all the time gardening.

When Gina first wore them they were a bit uncomfortable and the waist-band dug into her.

But after a few days they became more comfortable.

On hot days she notices them more.

Gina is getting on very well with the pants and hardly notices she has them on.

She wears them every day.

Gina has started to see an improvement

Lipocontour do though recommend wearing the pants for 8-12 weeks during the day for long lasting results – but that visible results can be seen after four weeks.